I just became aware of "Archives of Sound," a YouTube channel apparently completely dedicated to videos (which are actually audio files along with still images) from the "Guildford Cathedral Choir (1961-1974) during Barry Rose's tenure as Organist &amp; Master of the Choristers."    I'm quite sure I'll be posting from this collection fairly often; there's lots of Anglican Chant.

This is a lovely recording of an English-language version of the Gregorian chant Eucharistic hymn Ave Verum Corpus, recorded at Guildford Cathedral in May of 1967:


These are the words they are using here; I haven't been able to determine their provenance:

Hail, true body, born of Mary,
by a wondrous virgin birth.
Thou who on the cross wast offered
to redeem the sons of earth;

Thou whose side became a fountain
pouring forth thy precious blood,
give us now; and at our dying,
thine own self to be our food.


Wikipedia has the Latin words, along with a more literal English translation:

Hail, true Body, born
of the Virgin Mary,
who having truly suffered, was sacrificed
on the cross for mankind,
whose pierced side
flowed with water and blood:
May it be for us a foretaste [of the Heavenly banquet]
in the trial of death.
O sweet Jesus, O pious Jesus,
O Jesus, son of Mary,
have mercy on me. Amen.


Here's the score of the chant in Latin from the Liber Usualis: 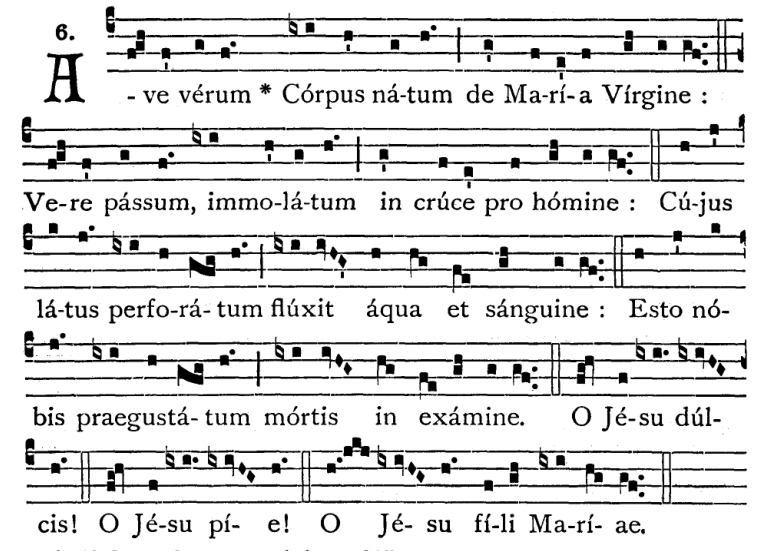 More about this hymn, from the same Wikipedia link above:


"Ave verum corpus" is a short Eucharistic hymn that has been set to music by various composers. It dates from the 14th century and has been attributed to Pope Innocent VI.[1]

During the Middle Ages it was sung at the elevation of the host during the consecration. It was also used frequently during Benediction of the Blessed Sacrament.

The hymn's title means "Hail, true body", and is based on a poem deriving from a 14th-century manuscript from the Abbey of Reichenau, Lake Constance.[citation needed] The poem is a meditation on the Catholic belief in Jesus's Real Presence in the sacrament of the Eucharist, and ties it to the Catholic conception of the redemptive meaning of suffering in the life of all believers.

Barry Rose has written choral music, too; I've sung some of his Responses, for Mattins or Evensong (I can't quite recall at the moment).

I had actually never heard the Gregorian version of this song until today - but I have heard many composed versions.  Most famous, perhaps, is the Mozart version, here sung by King's College, Cambridge:


This is one I've just heard for the first time; interestingly, it seems only to be available on Chinese video sites!  And so, I'm not sure who the composer is, but the singers are the Salisbury Cathedral Choristers:

Clearly a more contemporary setting; if I learn more about it, I'll come back to post again.